(Please note that not all works are for sale as they are part of our private collection.) Availability upon request. No commissions. We do not represent the artist.

All street works are to be considered as "attributed" to. It means to consider as made by the one indicated especially with the strong evidence but in the absence of 100 % conclusive proof. And sold as such. Same goes for barter traded works, gifted works from the artist. Works left behind at sites, in friends apartments in the early years and so on.

Banksy (British, born July 28, 1973) is one of the most well-known, if anonymous, street artists working today. Banksy, the pseudonym adopted by the artist, guards his privacy and the details of his life remain largely unknown to the public. He initially garnered fame for his graffiti, which combines spray paint and stenciling techniques with commercial, political, and contemporary imagery, infused with ironic social commentary and humor. His work first began appearing on walls in and around Bristol and London’s Shoreditch district during the mid-1990s, and he has since gone on to place images on the sides of corporate buildings, billboards, and the Israeli West Bank wall.

The unveiling of a new Banksy works often incorporates pranks or performance. For example, he secretly added his own pieces in museums like the Tate Modern in London or the Paris Louvre, smuggling them in under a coat and discreetly affixing them to a wall. He has also opened gallery shows to the public with specially bred rats running around the space, and once inserted an inflatable doll dressed as a Guantanamo Bay prisoner into the Disneyland theme park in California.

In 2015, Banksy created a large-scale installation titled Dismaland Bemusement Park, and immersive and fully functional amusement park that featured political commentary on the distribution of wealth, sexism, and the UK government. The park operated from August to September of 2015, was funded by Banksy himself. In addition to his regular graffiti practice, Banksy creates works for several charities, and consistently opens exhibitions to wide audiences and critical acclaim. He lives and works in England.

Bansky is a street artist, not a print or studio artist. He is famous for his Street Work. Imaging if the Paintings of Rembrandt were worth only $50,000 and his prints (which there are thousands of) were worth millions. One would say the world is upside down. A print is nothing more than a poster, printed in a limited amount, so what if the artist has scribbled his name on it. A poster is a poster. Seasoned collectors should be much happier with an original street or street related early piece on their wall than a poster. As we would consider, your poster inferior to the original. 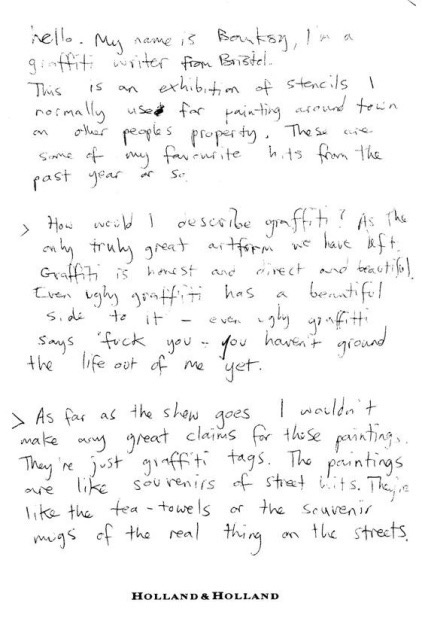 A wonderful early Banksy letter calling his own studio works and lithos for souvenirs. The real works are done on the streets...

"Hello. My name is Banksy, I’m a graffiti writer from Bristol. This in an exhibition of stencils I normally use for painting around town on other peoples property. These are some of my favourite hits from the past years or so.
How would I describe graffiti ? As the only true artwork we have left. Graffiti is honest and direct and beautiful. Even ugly graffiti. Has e beautiful side to it - even ugly graffiti says fuck you - you haven’t ground the life out of me yet.
As far as the show goes I wouldn’t make any great claims for these paintings. They’re just graffiti tags. The paintings are like souvenirs of street hits. They’re like the tea-towels or the souvenir mugs of the real thing on the streets."...

The reality is that those works exist. They are the best. And there are many. They are with collectors, traders, former Banksy friends, current Banksy friends, people who know nothing about art but who have had them in the living room for 20 years. These are the most important and strongest works

Please note that not all listed works are for sale. Availability upon request. All shown works are in stock. No commissions. 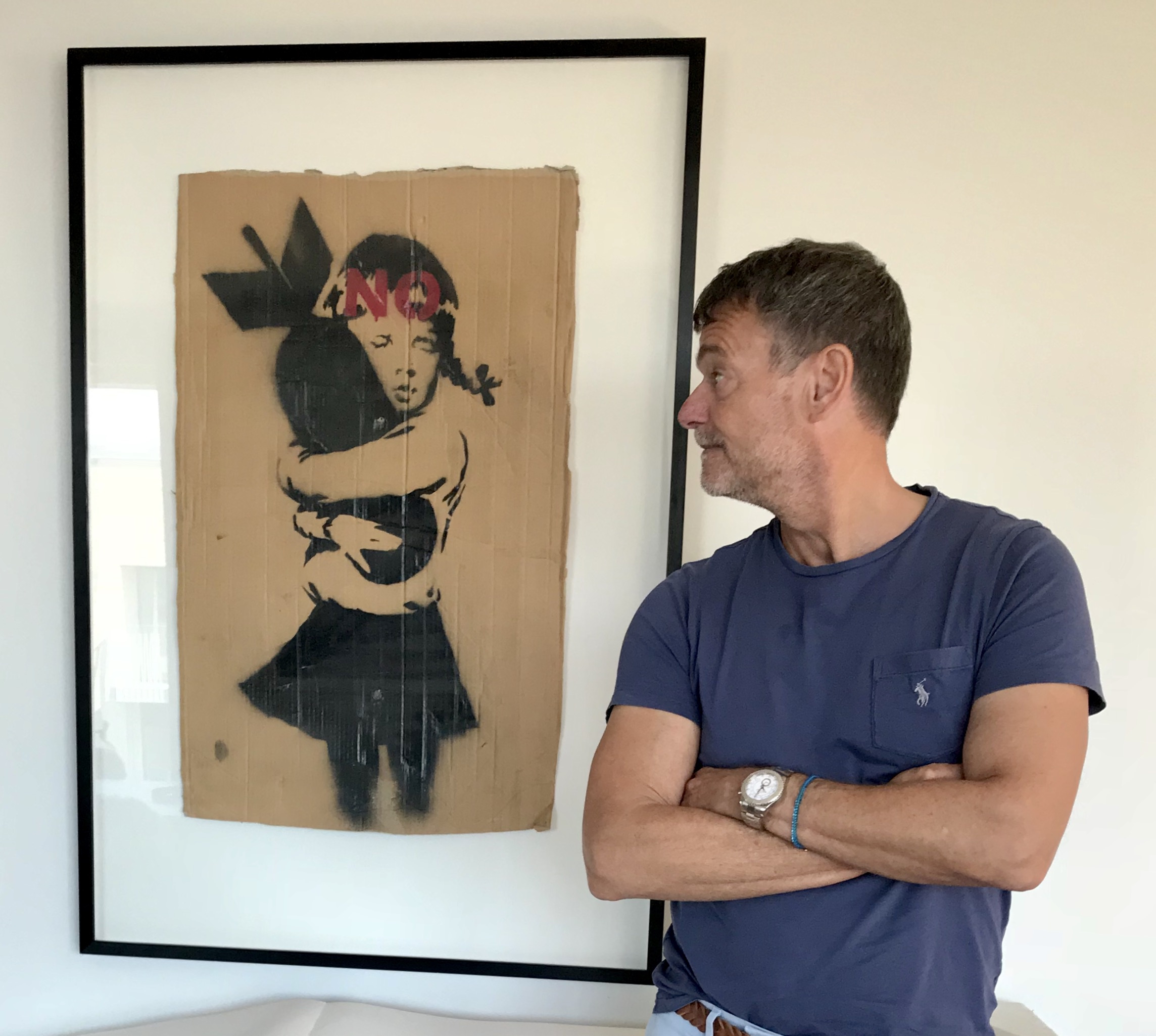 Here with the "Bomb hugger" that was depicted in Basingstoke Gazette on March 24th 2003.

"Pest Control Office" (PCO) is Banksy´s official organ. They do not "authenticate" any street work.

All street works are to be considered as "attributed" to. It means to consider as made by the one indicated especially with the strong evidence but in the absence of 100 % conclusive proof.

If you do not understand this, please do not send enquiries and do not expect an answer.

PCO will never issue formal COA´s for what is considered street. No need to ask. Buy a litho.

"Pest Control Office" however has an alternative understanding of authenticity. Authenticity means it either is by the artist or not. Authentication, in the law of evidence, is the process by which documentary evidence and other physical evidence is proven to be genuine, and not a forgery.

PCO has invented a third option. Works made by the artist and often signed by the artist cannot get a certificate of "AUTHENTICITY" in spite

that the artist and PCO has confirmed the work is by the artist!!!!  This is often for gifted works in his early years. Gifted prints often dedicated from

workshops and shows and so on. The artist simply does not wish to "add auction or market value" to the owners of such works by issuing a coa. But that´s not a question of authenticity. Authenticity in art is to establish as genuine and by the artist (or not). There is nothing in between. When it comes to official numbered prints and studio works PCO is about authenticity.

All sales are final unless other agreed before sale.

We strongly advise clients and potential future clients to stay away from street works allegedly made by Banksy listed on mainly online auctions where the identity of the consignor is hidden to the buyer. Many fakes with slim stories are being sold through small auction houses affiliated with the bigger platforms. Then again, we purchased "Donkey Documents" and the Basingstoke "Bomb Hugger" on eBay :-) with loads of documentation that is.

Street pieces are sold as described. Attributed to Banksy. When a work bears the BANKSY spray tag it is considered a signature and hence not attributed but by the artist. One thing to look out for is the tag signature. Banksy left it out quite early on the street pieces. People recognized the name and brought the pieces home. So, if you see a work with slim history, no really proven provenance, no timeline and with the Banksy tag it´s very likely a fake.

"We are concerned with Pest Control’s refusal to deal with street works, but its policies have created a situation whereby collectors want and perceive they need certificates of authentication before buying anything. "There is a significant body of Banksy street pieces on the market, and these are the most important works Banksy ever created -- they are the seminal pieces and they exist -- this is a fact."

In 2007 a group of auction house specialists and exclusive dealers formed an independent authentication and certification service, dedicated to cataloguing Banksy’s "Street Works". Authentication was based on the professional opinion and rigorous research of VERMIN´s Board of Experts. Collectors and dealers were invited to submit their Banksy "Street Works" for possible authentication. If authenticity could be proved beyond doubt by documenting the works proven history, it was given a VERMIN certificate. All works and their proven provenance was available for public examination and published on the internet. This process was to help protect against future fakes and will provide the single most comprehensive guide to surviving works, creating an invaluable tool for collectors, auction houses and dealers alike...

Vermin´s primary aim was to provide a necessary and valuable record of all the pieces that has survived the streets and by right of ownership and visual integrity deserve to be recognized in their own right. Sadly, whilst much of the artist´s early work has found its way into our city´s collective consciousness, relatively few pieces have survived, those that have should be recognized for the iconic foundation stones they are.

VERMIN was in no way associated with the artist known as Banksy and as such is uniquely placed to provide this service without risk of prejudicing the artist to possible prosecution for vandalism.

Did Banksy approve of this service? No.

Banksy´s "Street Works" are the pieces which the artist created clandestinely on the streets and without permission at the beginning of his career as a graffiti artist. Neither the artist nor any body associated with him is free to authenticate these works without the risk of opening the artist up to potential prosecution for vandalism....

As these works are without doubt the most important pieces the artist has created and are seminal to both his development of the Urban Art movement as a whole, it is essential that their authenticity be addressed at this early stage to protect them from loss so that their true importance can be recognized.

In 2014 MultiplesInc Projects hit the headlines when we purchased the largest mural ever.

The work is called "Donkey Documents". Please see "view works" for all in stock. We only work with people who is or who has been close to the artist.

Banksy created several "Placards". Mostly cardboards with sprayed stencil images on. MultiplesInc Projects has conducted a lengthy and thorough investigation into the placards. Mainly because we were able to acquire the ONLY original "Bomb Hugger" with 100 % proof it was Banksy. The placard was depicted in Basingstoke Gazette with a protester holding the placard. This is important because the placard gives evidence to which others could possibly be genuine. Our guess is that a lot of the placards on the market are fakes. Nothing to do with Banksy and nothing to do with the 2003 Anti War March. 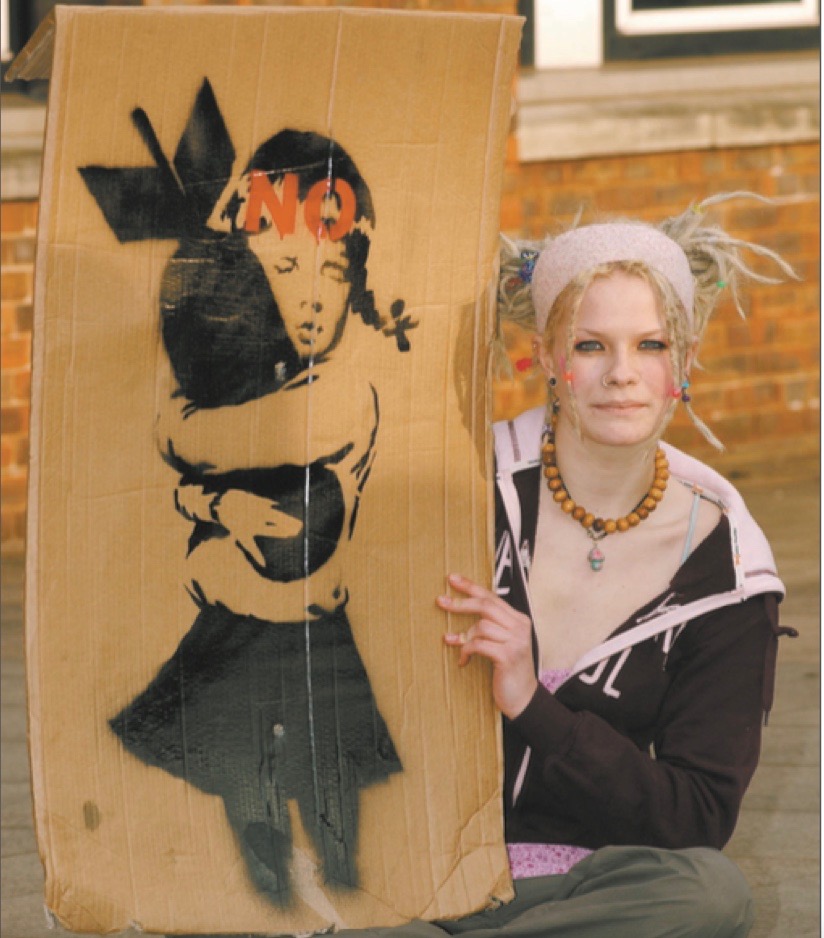 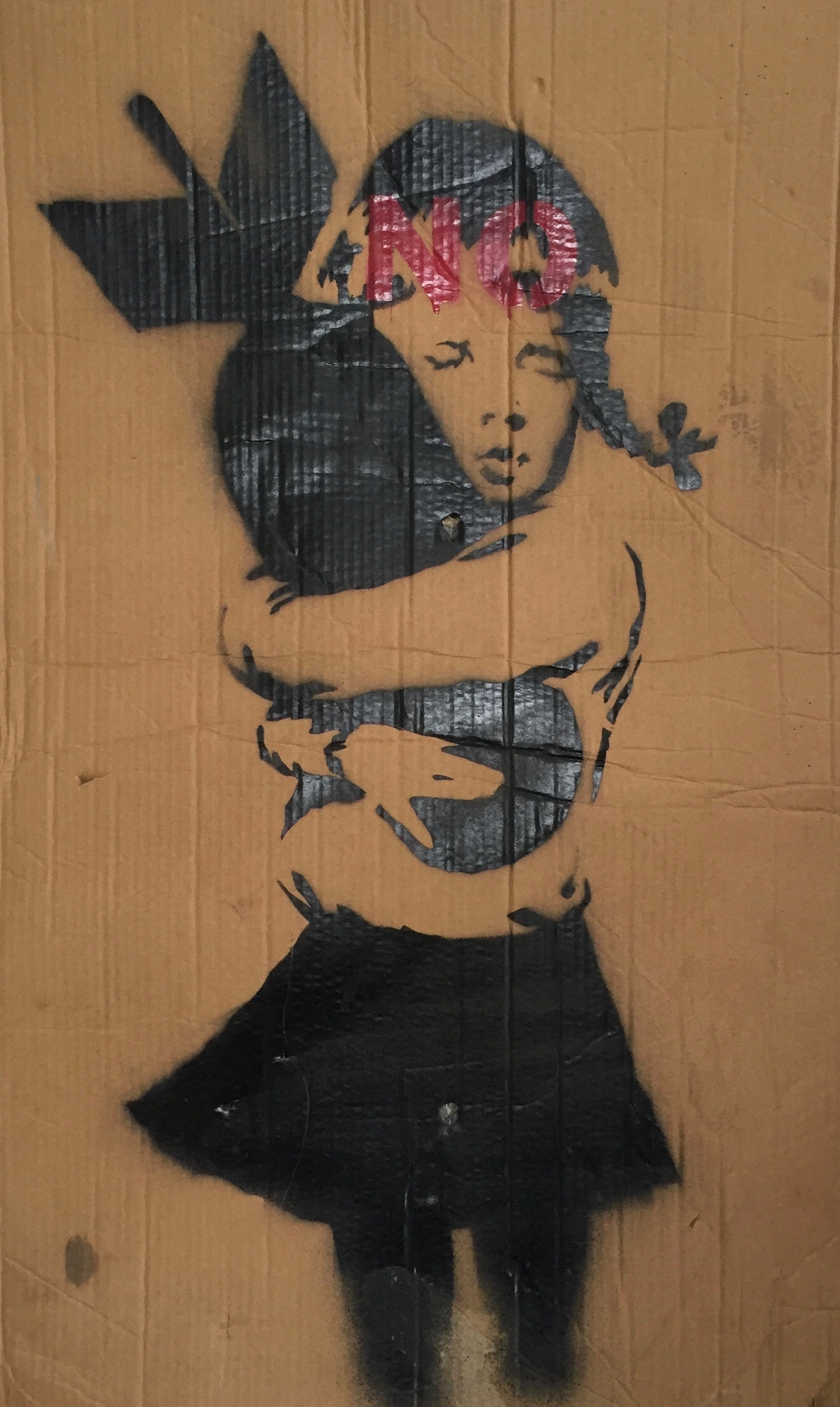 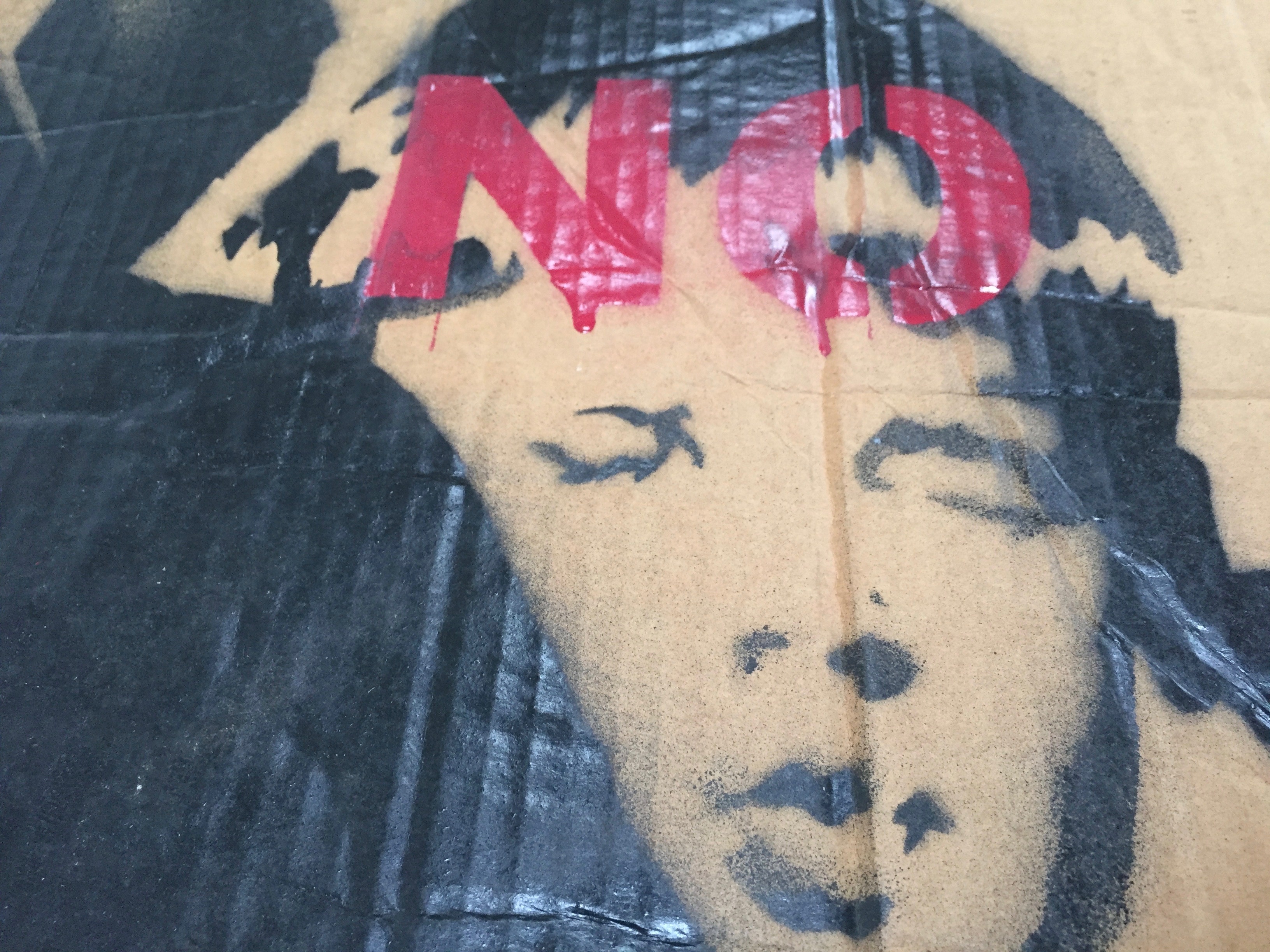 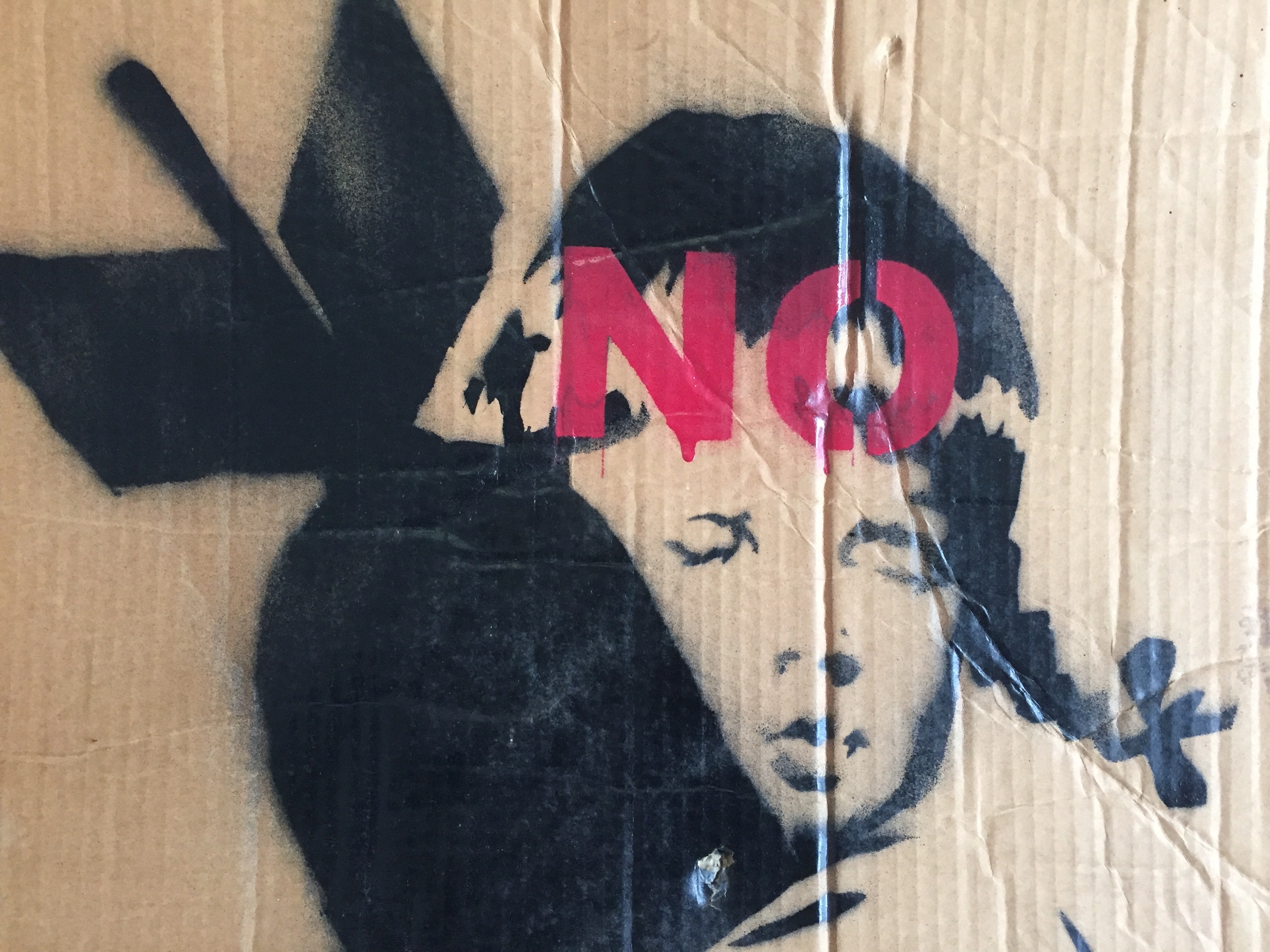 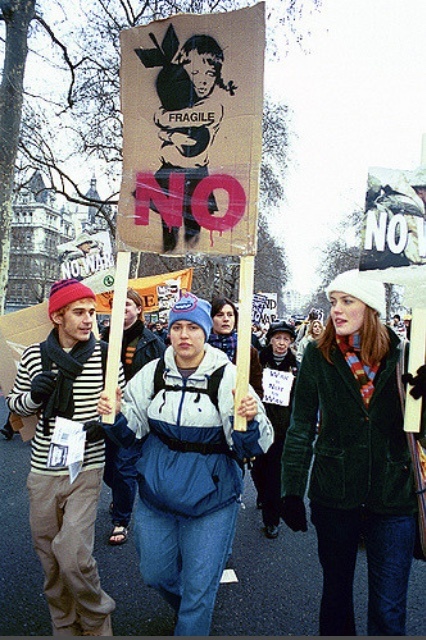 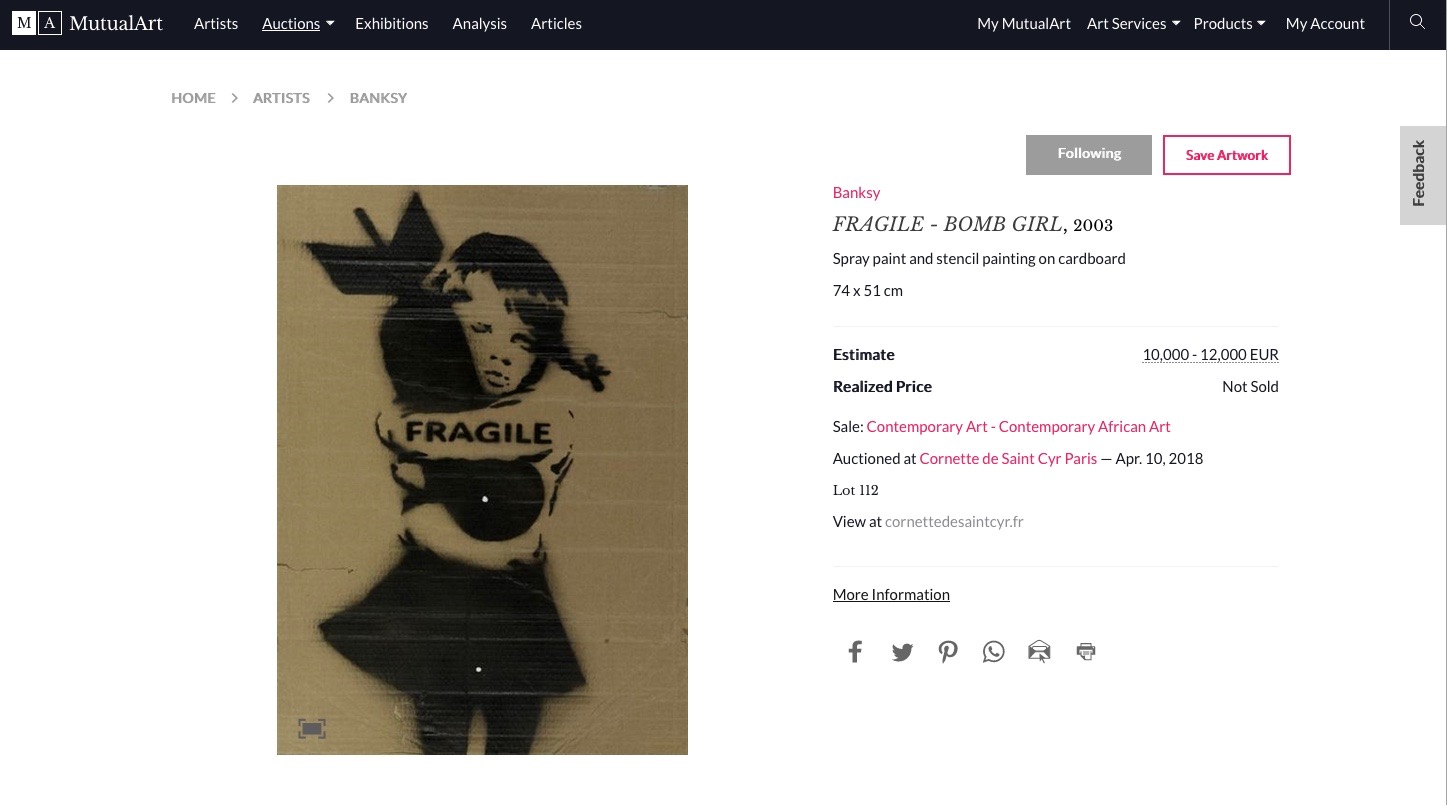 Fake placard "FRAGILE" version on Cornette St. Cyr. It has many pointers to a fake. We will not reveal all. The most obvious of course is that the word "FRAGILE" is stencilled. The ones Banksy used during the demo were pre printed with the word FRAGILE from the cardboard provider (not stencilled). Banksy just placed the stencil so the word FRAGILE would be visible and interact with the preprinted cardboard. See Next photo for a proven one. And of course proven provenance is all. 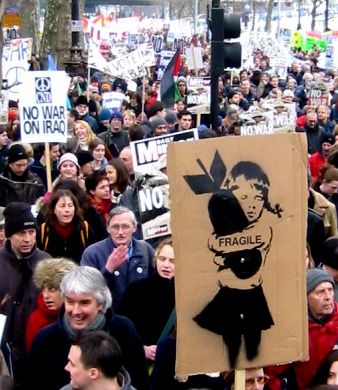 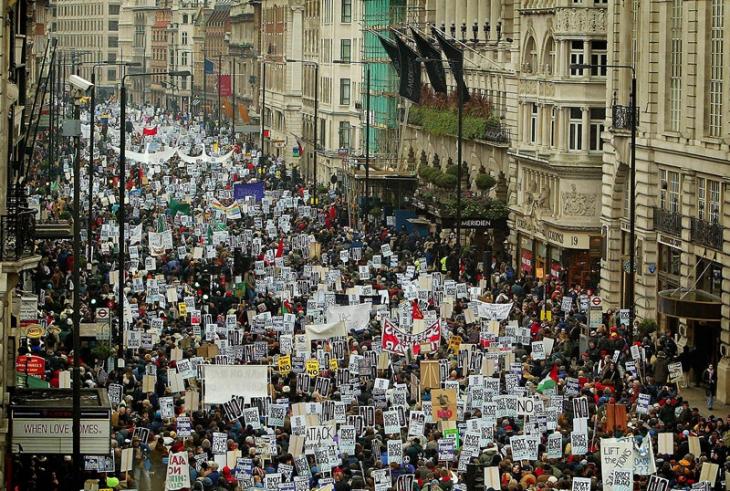 Spot the Banksy your self.

Fake. Clearly an attempt to photo manipulate a fake into a contemporary photo from the 2003 demo.

Below a photo of a "Happy Choppers" as seen in Banksy´s "Wall & Piece". 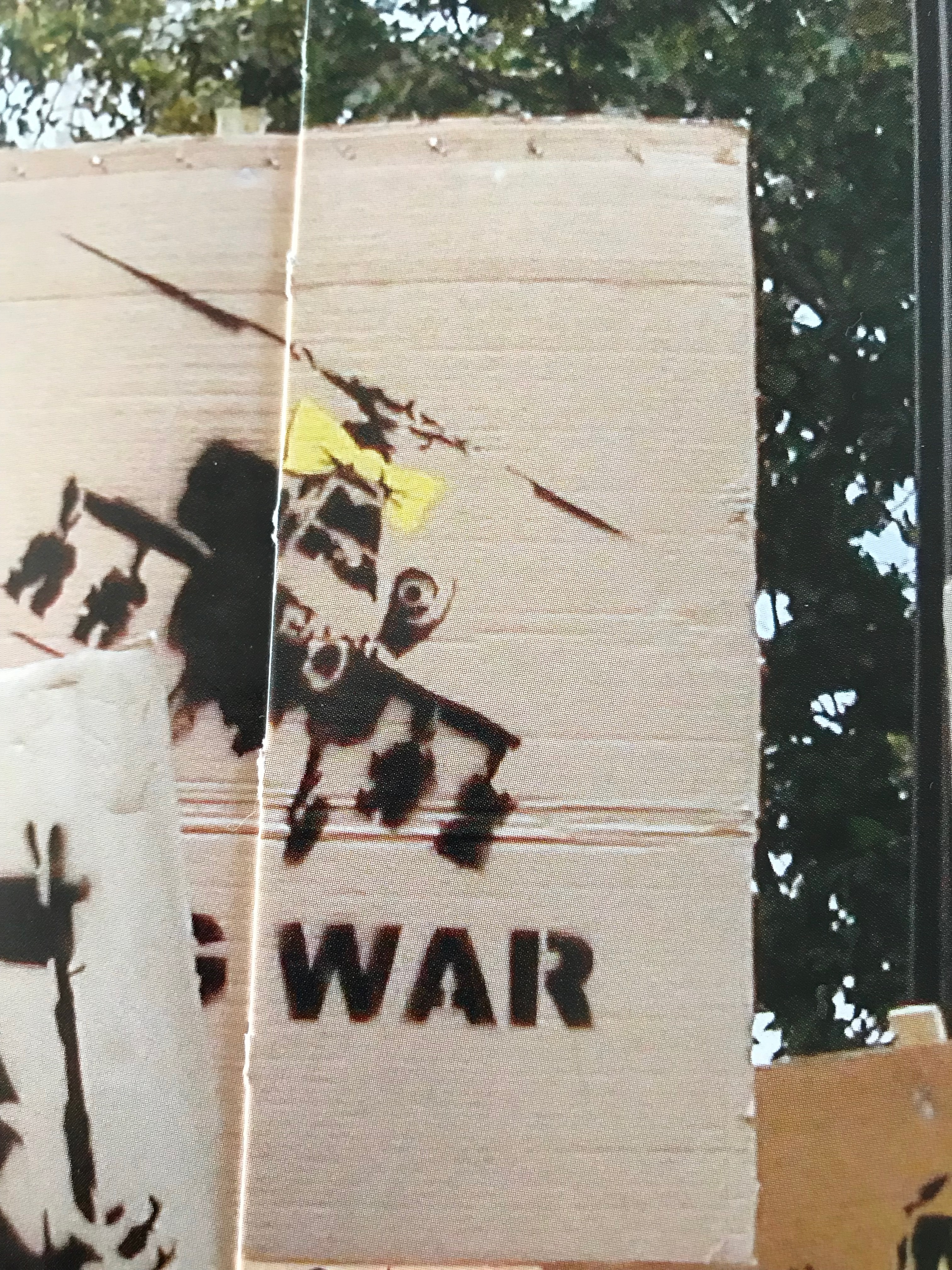 And below here a "Happy Choppers" recently on auction. Notice the extreme likeness. At first we thought this was the actual work as seen in "Wall and Piece". But compare the A in WAR. Not the same. And there are other differences. This does not mean the auction piece is wrong. But it means it´s NOT the one in the book. Maybe an attempt to look like the actual one? It has the exact same folds. Same top etc. 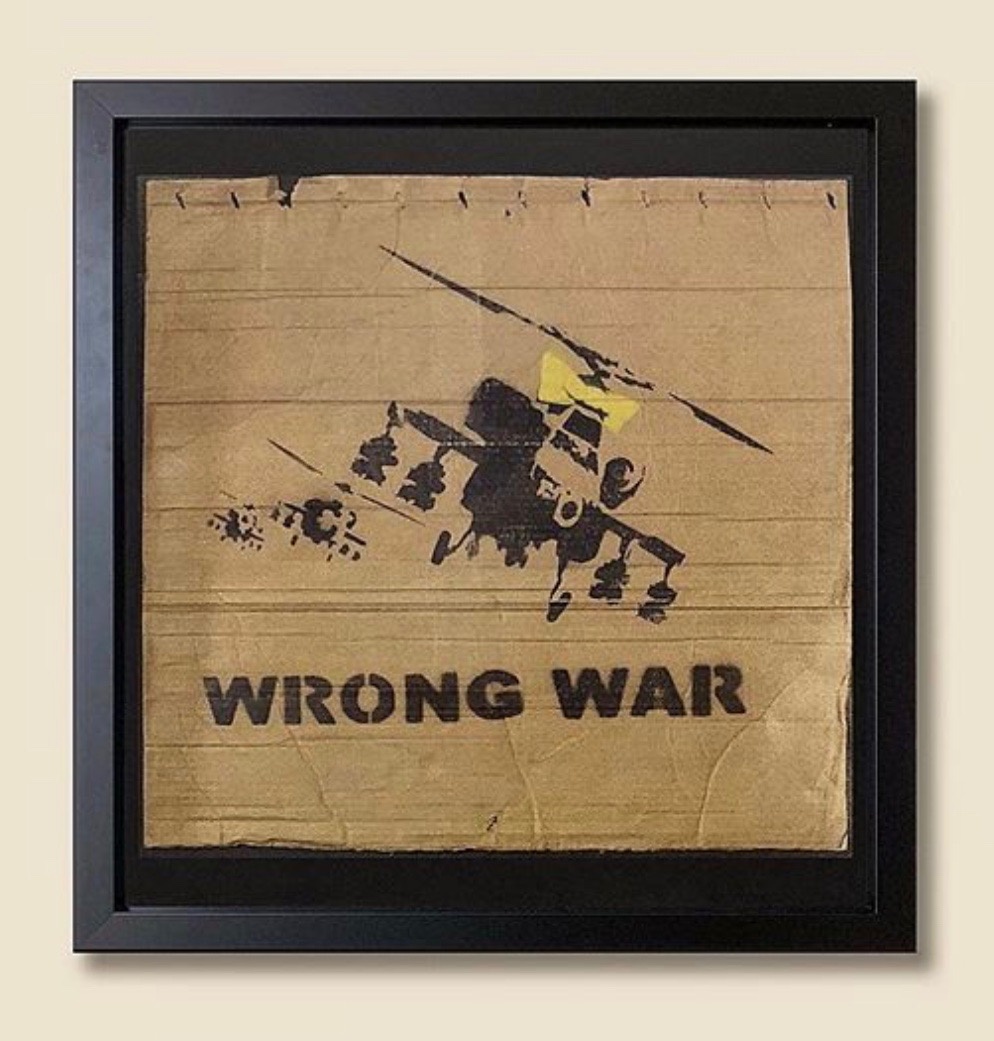